If you are interested to learn more from Kristina, she also teaches an online course here on The IPS Academy on how to master confidence and effectively set goals. Learn from Kristina, a two-time world record holder, about how to make impossible goals possible.

Check out the intro video and the full course description to learn more.

3 years ago (gosh time flies) I had the pleasure to talk to 2X world record holder, Kristina Paltén, a Swedish ultra runner and lecturer on The IPS Podcast.

We also talked about what she did the year after, in 2015, when she decided to do something that received attention from all corners of the world, as she became the first woman to run 1144 miles alone through Iran to fight the prejudice we have about other cultures.

Millions of people were positively affected by the message she brought, that the media does not often correctly portray strangers and other cultures.

Across the world this message and story was shared and celebrated, about this one woman who had 1144 miles of trust.

All of these topics, along with goal setting, facing your fears, and confidence, we covered in the first interview, episode 013 – Kristina Paltén, Ultra Runner – Alone Through Iran, 1144 Miles of Trust, Prejudice, and Human Kindness.

This time, however, I interviewed Kristina about something else she is quite a beautiful example of. Namely, how to live a happy and meaningful life.

Kristina is someone who lives very close to her own heart’s calling. That is, to what makes her happy and what she finds meaningful in life.

These two topics of living a happy and meaningful life are divided into three categories in this interview:

We cover the various adventures and the life changes Kristina has been through, from working as a civil engineer to becoming self-employed, being married and wanting children, to being divorced and starting over. And from never having run any race to running her first one at the age of 32 and becoming an ultra runner.

Together we will explore what Kristina has learned about happiness and meaning over the years, so far.

I hope you will enjoy it.

EP 029 - What is The Good Life with Two-Time World Record Holder, Kristina Paltén

"In one way, I consider death to be the biggest adventure of life."

"Setting a high target and wanting to achieve something really big, is related to a risk. And that risk means that you might be exposed to pain. If you are not willing to take that pain, you will not reach your target." 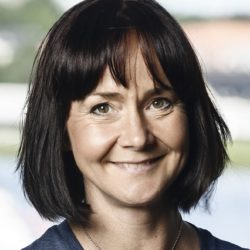 Question about this episode: Which was your favorite lesson or insight about living a happy and meaningful life from the interview with Kristina? Let us know in the comments!

Kristina also teaches a course on The IPS Academy about confidence and goal setting.

If you’d like to learn from a two-time world-record holder how to effectively set goals and build your confidence to make the impossible possible, check out the description and intro video of the online course!